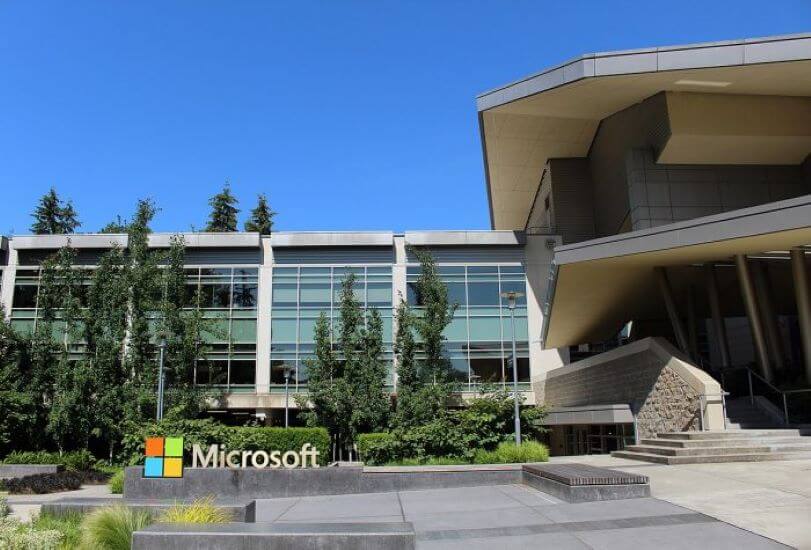 Analysts had expected Microsoft to earn $35.7 billion in revenue and report earnings per share of $1.32. The company thus easily beat expectations. The company’s stock was up 1.5 percent in regular trading, and up another 1.5 percent in after-hours trading. Microsoft said it returned $8.5 billion to shareholders in the form of share repurchases and dividends during the quarter. Read the full news item on Venture Beat. 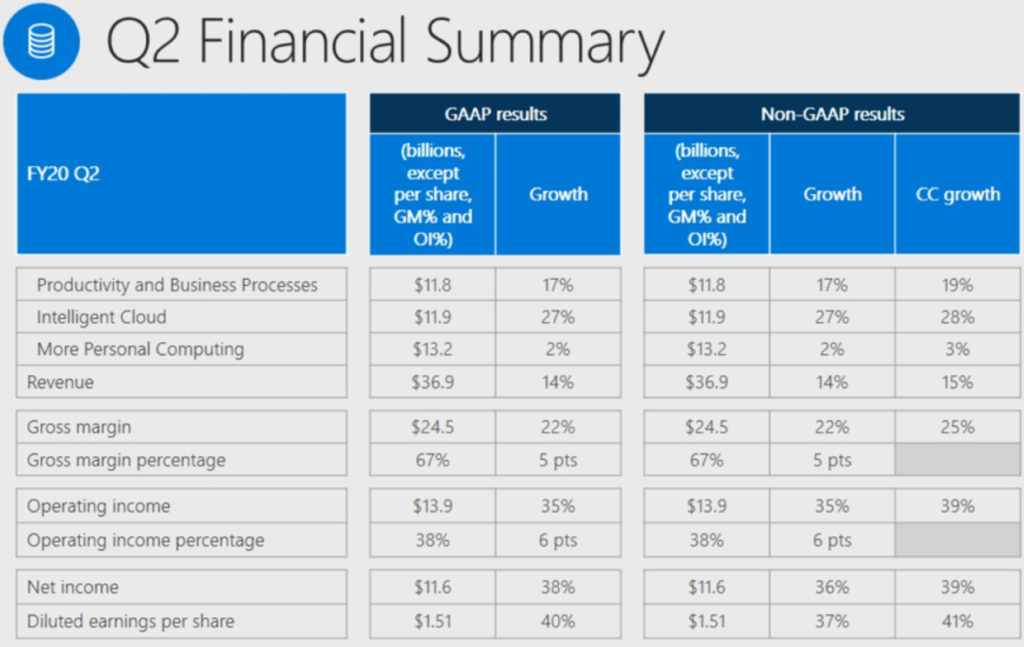 Analyst Take: Microsoft has continued its fantastic run of form with growth coming in just about every area sans gaming (and that should pick up later this year with the next-gen XBOX). The top level numbers were impressive versus the same quarter last year with growth in revenue, operating income, net income and EPS. Truly a great day for Microsoft. Here’s a quick breakdown.

The top of the numbers only tells part of the story though. What is most interesting running through the numbers is the level of performance across Microsoft’s varying BU’s as each of the three major categories achieved growth this quarter.  Let’s look at Productivity, Intelligent Cloud and Personal Computing a bit closer.

Revenue in Intelligent Cloud was $11.9 billion and increased 27 percent (up 28 percent in constant currency).

In Depth: The growth in this area is always focused around Azure. This quarter came in at 62 percent, a slight improvement from the 59 percent growth that was seen in the first quarter. This growth is positive though, as the trend over the past several quarters has been downward, despite the numbers still being significant.

The big talk for the coming year is going to be Microsoft’s ongoing competition with AWS. This isn’t necessarily straight forward as the breakouts by the two companies are done differently, but I’ve been predicting a 1-3 percent market share gain by Microsoft from market the market leader, of course this won’t be revealed until well into 2021 when the market sizing exercises are complete.

Revenue in Productivity and Business Processes was $11.8 billion and increased 17 percent (up 19 percent in constant currency).

In Depth: Office for both commercial and consumer continue to grow in double digits as Office 365 commercial led the way with growth near 27 percent. I was impressed by LinkedIn’s continued growth of 24 percent as well.

Dynamics 365, while not often a highlight of the earnings call had a massive quarter with 42 percent growth. I believe the growth of Microsoft’s Power Platform and the associated developer community is powering another wave of growth for the company’s business productivity suite.

Microsoft has always had a strong position in the office productivity suite, so the growth isn’t overly surprising. However, I’ve long been bullish on Microsoft providing greater competition to Salesforce in CRM and it appears this is starting to transpire as D365 growth surges.

Revenue in More Personal Computing was $13.2 billion and increased 2 percent (up 3 percent in constant currency).

In Depth: Surface, which has become a staple in the premium PC space saw a 6 percent uptick as new variants including the Pro X and Pro 7 and Laptop 3. The second quarter often being the best for Surface still grew reaching nearly $2 Billion in the quarter. So the YoY uptick may not have sounded like much but it was about $150 million more revenue than the year before.

Windows also impressed with 18 percent rise in OEM and 25 percent growth in commercial. While windows is usually more steady than this, it is easy to attribute this to the retirement of Windows 7 and the upgrades that would coincide.

Gaming saw a downturn for the quarter and was basically the only downturn. But, this seems consistent based upon the new consoles set to come out later this year. AMD’s soft semi-custom numbers yesterday, were a safe indicator that Microsoft would also show a fall off in this area.

Coming into this quarter’s earnings, I was looking for a few things from Microsoft. First, I wanted to see if the Cloud revenue growth continued to slow or if there was another spike. The 62 percent was a small bump from Q1, which is something that should revive investor confidence that continued growth in the cloud business isn’t slowing.

Since Azure is such a big focus, I also wanted to take a deeper look at the growth of the subscription cloud services. Double digit growth from Office 365, both consumer and commercial along with a huge 42 percent growth in the Dynamics 365 business show that adoption of those services is still growing at adouble digit clip. This is an important number to watch.

Finally, I wanted to see how the Surface performed. This could arguably be the most modest of the numbers, but I want to see continued momentum in this category as I see Microsoft uniquely positioned to not only grab market share for PC but to also win market share from Mac.

It’s hard to find much bad news for Microsoft from this quarter. Gaming will need to bounce back, but as mentioned above, I believe it will when the next generation Xbox is GA. Going forward, it’s important to watch the Cloud business and keep tabs on its continued growth. It is the catalyst for the growth of the rest of the portfolio with M365, O365, D365 and so many of its ancillary products and services drafting off of the success of Azure.

Semiconductors Are Hot, But Was Q4 EPYC for AMD?

Huawei Finds Its Way Into Britain’s 5G Plans, Albeit Partially

HP Continues To Fight Xerox Overtures… As It Should