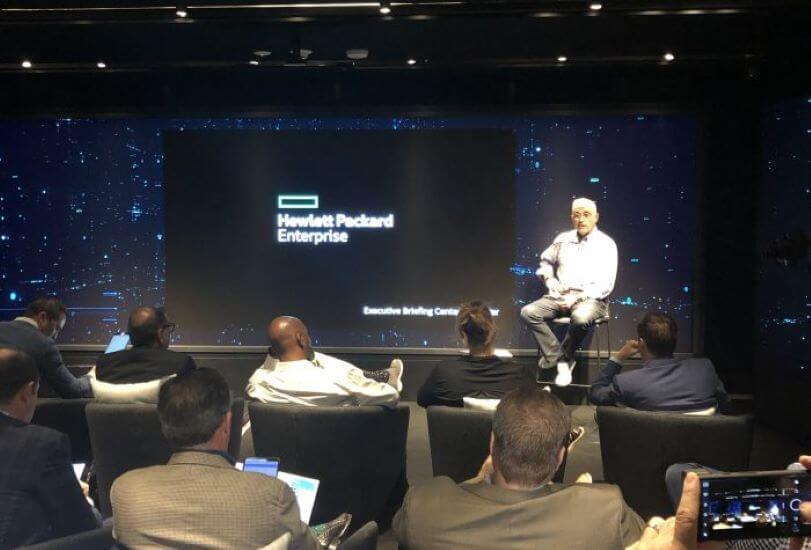 This week HPE held an independent analyst event at its new executive briefing center in San Jose where the company hosted 20 analysts from across the globe to hear from its senior leadership including CEO Antonio Neri. During the event, the company provided a series of in depth insights into the companies short and mid-term roadmap. While there was no lack of technology talk covering Edge, Hybrid IT, Security and AI, the most visible theme and notable anchor will be in the evolution to a services based approach that models around the growth of the experience economy. Let’s unpack some of the larger takeaways form the event.

Well, it isn’t quite that simple, but, that doesn’t make the story any less compelling. CEO Antonio Neri came out straight away sharing his vision of the future.

“Edge Centric, Cloud Enabled, and Consumed as a Service”

With a total available market of over 400,000,000,000 at the edge as well as another 150,000,000,000 at the core, Neri is laser focused on being fast moving and enabling customers to move away from investing in tech for tech sake and truly transforming in order to meet business outcomes.

The Company Is Doing Well in Hybrid IT 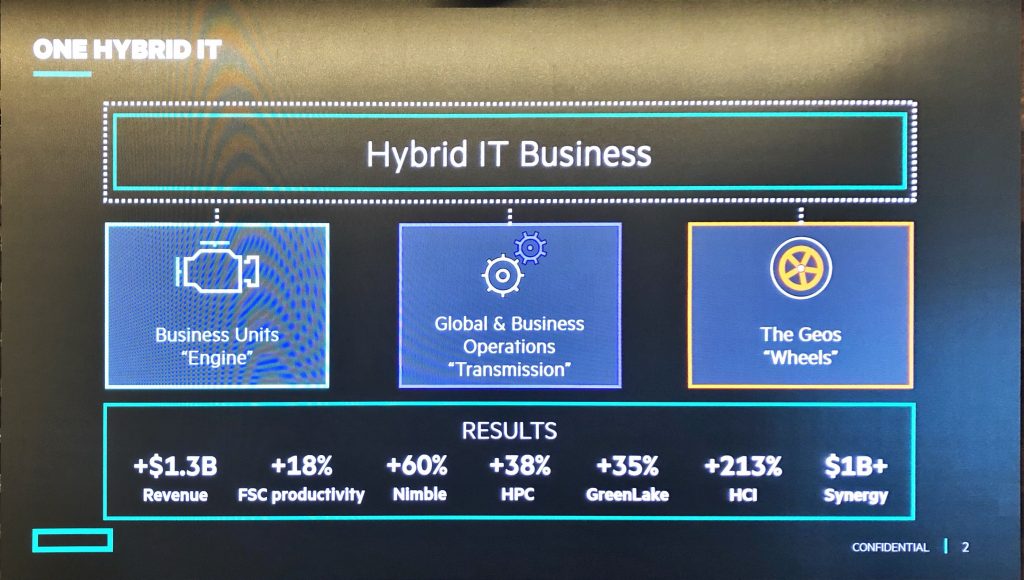 In Davis’ presentation, he shared the company’s improvements over the past two fiscal years, which have been sizable with growth in revenue across product categories including storage, high performance computing, services, hyperconverged and cloud.

While excelling in Hybrid IT itself doesn’t take the company over the experience bridge nor does it enable the 2022 objective of everything as a service, what it does do is serve as the proof of concept AND builds momentum around HPE heading into the critical period in which it is putting the pieces together and delivering on its commitment.

The Hybrid Strategy Is Built on Simplifying Complexity 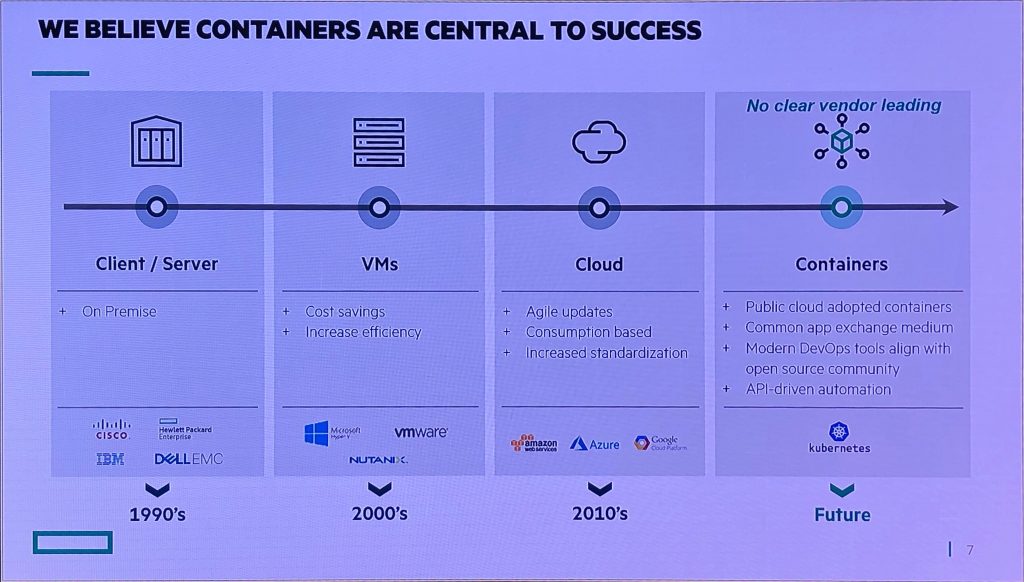 Neri, and then Phil Davis, President of Hybrid Cloud went on to further reiterate the message of where HPE sees its role in overcoming IT Transformation challenges by the company building solutions to meet one major objective; one that I believe will place the company squarely in the drivers seat if it can be achieved.

“Provide lowest cost per workload in a true hybrid environment, delivered as a service.”

In order to do this, the company will need to address the following

Containers were paramount to the conversation, but given the current state with diverse container based solutions that can be deployed in virtualized environments or in bare metal, HPE has a strong belief in a standardize bare metal use of Kubernetes being core to modernizing and delivering workloads in the hybrid cloud.

While I can clearly see the value proposition in this approach, I believe it is important to note that VMware Tanzu will be a formidable competitor to this strategy based upon risk and security that is associated with VMware’s massive enterprise footprint. 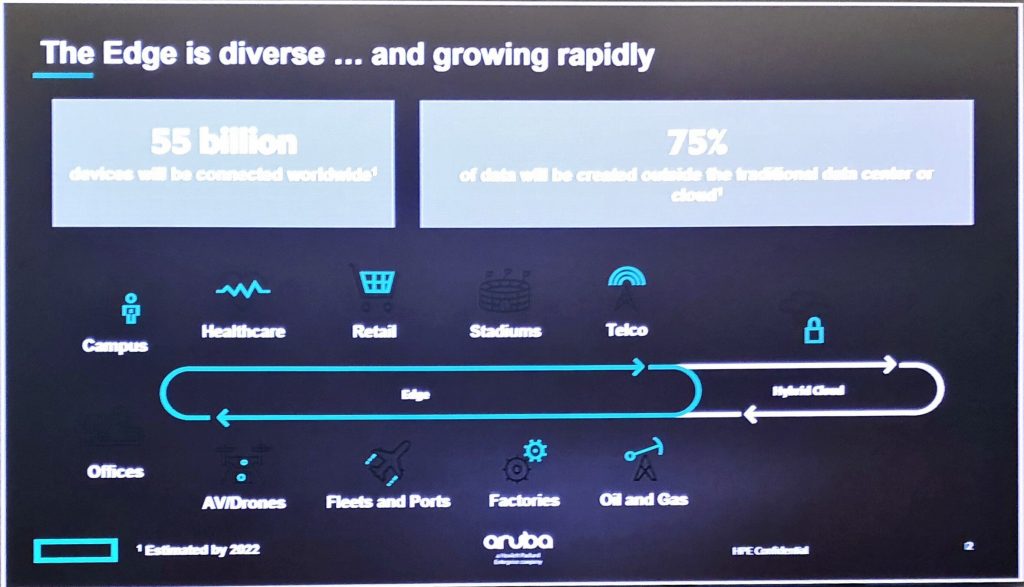 Neri, very early on in his presentation declared that moving the cloud closer to the data is much easier than moving the data to the cloud. In short, the edge is growing rapidly, hence the above mentioned $400 Billion TAM that the company is going after.

Aruba President, Keerti Malkote also spent the time to expand on Neri’s comments, but essentially the edge is now comprised of more than 55 billion devices and estimates suggest that 75% of data will be created outside the traditional datacenter or cloud.

With Aruba’s portfolio, plus the company’s massive investments in the industrial edge (Edgeline), it is clear that while there was an immense amount of focus placed on hybrid cloud, the company clearly has its sites set on what is happening on the edge.

As we all know (and if you don’t), the cloud and the edge will all be connected. This will be driven by greater connectivity like 5G and WiFi 6, as well as the volume of data and critical insights that will need to be operational outside of the data center to deliver the future of experiences like autonomous vehicles, immersive stadiums, AR/VR and smart cities.

There are always two sides to every story. To build a message and a platform that truly addresses the evolving need of the enterprise is going to present it fair share of challenges.

I like that HPE is focused on solving the most significant IT transformation challenges for business while also considering the business priorities that often create contention between digital transformation and technology investment.

Where I see the company most significantly differentiating itself is in its relentless commitment to delivering all of its offerings as a service. This is a massive undertaking for a company that has long been defined by big iron, but that reputation has more to do with the company’s tenure than its recent moves; HPE’s acquisitions and the subsequent integration of those acquisitions into the company’s hybrid offering are proof.

It will be important to watch the continued customer wins for HPE as the company’s hybrid story matures.