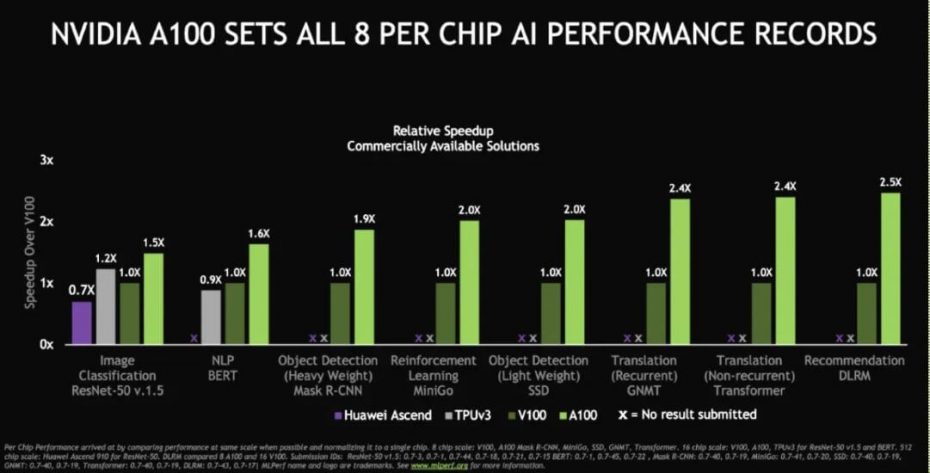 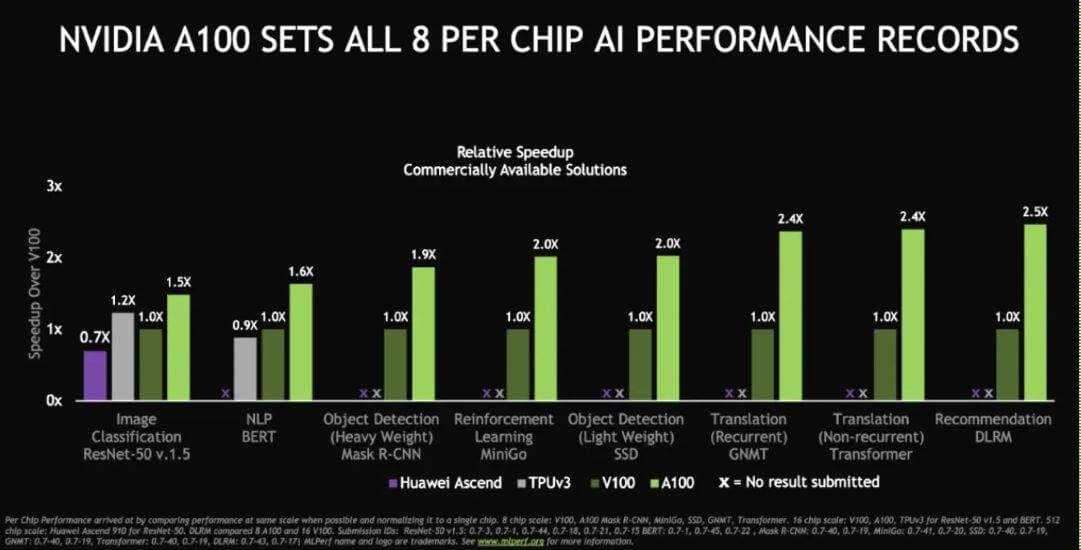 The News: NVIDIA delivers the world’s fastest AI training performance among commercially available products, according to MLPerf benchmarks released on 7/29/2020.

The A100 Tensor Core GPU demonstrated the fastest performance per accelerator on all eight MLPerf benchmarks. For overall fastest time to solution at scale, the DGX SuperPOD system, a massive cluster of DGX A100 systems connected with HDR InfiniBand, also set eight new performance milestones. The real winners are customers applying this performance today to transform their businesses faster and more cost effectively with AI.

This is the third consecutive and strongest showing for NVIDIA in training tests from MLPerf, an industry benchmarking group formed in May 2018. NVIDIA set six records in the first MLPerf training benchmarks in December 2018 and eight in July 2019.

Analyst Take: This past weeks MLPerf update should serve as a reminder just how strong NVIDIA’s position remains in the AI training space. The company’s overall position in AI and the growing ability to package hardware, software and frameworks to up-level the GPU from training hardware, to full stack acceleration for training and inference is gaining momentum.

The numbers are fairly self explanatory and can easily be accessed in the release itself. In short, the company was able to maintain ahead of all of its key competitors, while breaking its performance milestones and shortening time to solution at scale–this comes on the back of its A100 Tensor Core GPU as it has been packaged to build powerful supercomputing capabilities. Add the Mellanox acquisition and the future seems bright to be able to continue to innovate at scale.

This time around, the benchmarks added a few real-world use case tests that particularly caught my attention for enterprise AI applications. The first being recommendation systems and the second being conversational AI. NVIDIA has made significant progress in these areas and furthered it with recent announcements of Marlin and Jasper. These capabilities are two of the most sought after applications for AI and are priming further debate around CPU vs. GPU for inference.

NVIDIA has been able to proclaim significant wins in both conversational and recommender systems. One of its biggest included using its GPUs to support recommender engines for Alibaba and helping to power more than $38 Billion in sales in a single day late last year on the company’s Singles Day.

We can no longer kid ourselves thinking of GPU and Training and CPU and Inference. NVIDIA is ambitiously testing that theory with its advancements.

NVIDIA continues to show its dominance in the AI training space. This has long been its bread and butter and with the A100, it is seeing even greater momentum as it pulls away from its competition.

The rapid improvement in its performance at 4x in just 1.5 years is less about benchmarks and more about real world AI performance. The success in high growth tasks like Conversational AI and Recommendation systems serve as indicators of this success.

While I do believe these types of benchmarks matter a lot for understanding innovation and market position. I’m more focused on the applications–and that has been something NVIDIA has continued to excel at, and that is what will be most important in terms of driving revenue, growth and of course value for its shareholders.

Google Extends Work From Home Policy Through End of June 2021