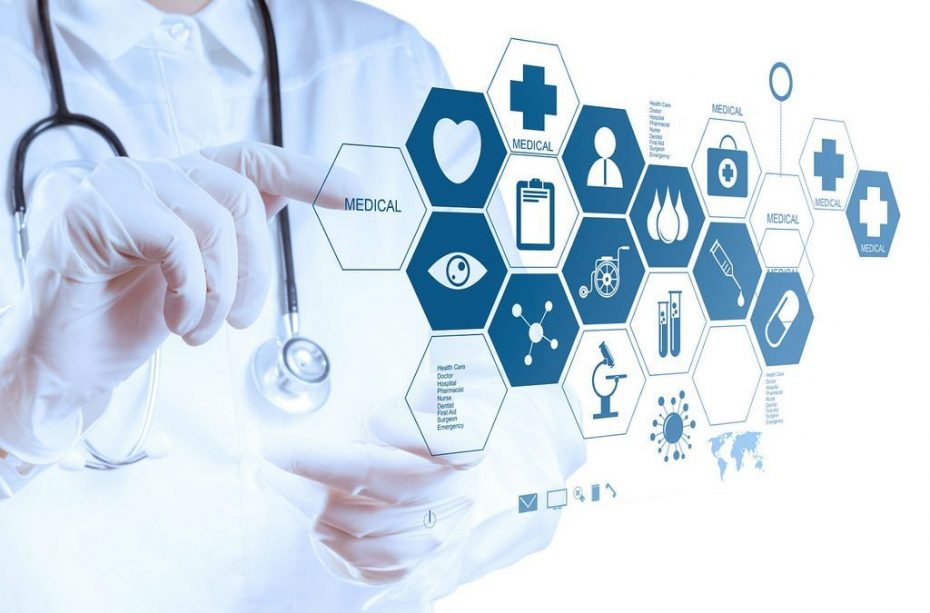 We talk about the role of technology in all sorts of situations—how we work, how we communicate, and how we share. What about how we receive health care? Wouldn’t it be interesting if someone asked providers themselves—the actual health care professionals who are the first points of contact for both patients and advancements in health IT—what they think about technology as it relates to patient care? Well, someone did, and there are several big-picture takeaways worth discussing.

Cello did more than ask physicians what they’ve been doing on their smartphones (although they did ask that, too). Let’s take a look at some key findings and discuss what it all means for the future of health care and IT.

Many doctors use mobile devices at work, and mostly for work. Not surprisingly, most physicians (82 percent) use their devices (generally smartphones) in their workplaces, and 77 percent use them to search for work-related information. Some reported using social media sites like LinkedIn (35 percent of US doctors), YouTube (43 percent of Brazilian and Chinese doctors), and Twitter (12 percent of European doctors) as well.

Doctors will recommend apps for patients with particular needs. Not only do doctors use mobile devices for themselves, but they’re also recommending them to their patients. In fact, 41 percent of doctors surveyed globally said they agreed that mobile apps “could be a game-changer to improving health outcomes in many of the patients” they see. App recommendations were popular for patients who wanted to lose weight and quit smoking—see Figure 1 below for a full breakdown.

So, what does this mean for the Internet of Medical Things (IoMT)? Could those apps become communicative between patient and physician? More about this later. 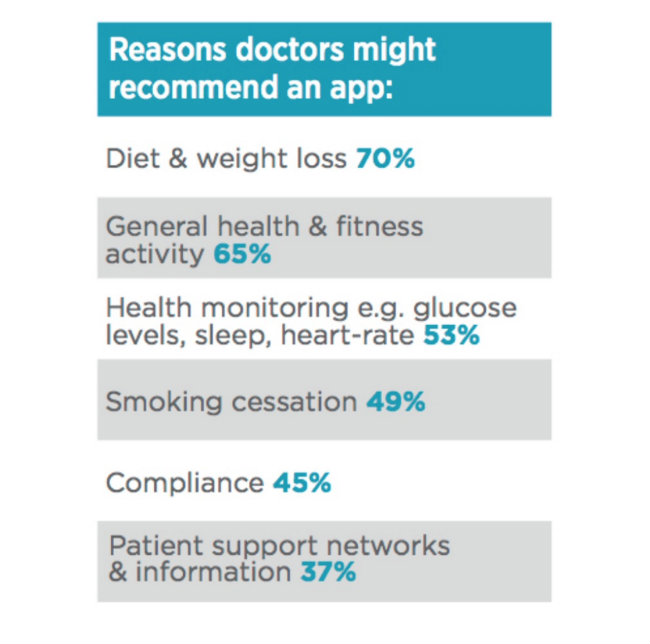 Digital communication is preferred because it saves time. Whether contacting a colleague, a patient, or a pharmaceutical sales representative with outgoing information, most physicians prefer phone calls and emails over Skype meetings and texts. (Refer to Figure 2 below to see the full breakdown, including where social media ranks.) Also telling is that globally, 33 percent of doctors surveyed would prefer to communicate with patients via a doctor-patient website or portal. In China, that figure reached 67 percent.

Figure 2: Digital channels most commonly used by doctors to communicate

When it comes to getting information, personal interaction is still favored. Doctors prefer to give information digitally when possible, as explained above, but they prefer in-person visits when they need pharmaceutical information. The interesting thing is that while 54 percent of physicians reported a preference for sales rep visits, only 22 percent said that visits were most likely to influence what was actually prescribed. It seems that face-to-face information from peers proved most actionable. Refer to Figure 3 below for a further breakdown. Patient self-diagnosis is common, thanks to the internet. When was the last time you looked up your symptoms online before an office visit and arrived self-diagnosed? Survey respondents said doing so was a common occurrence, happening regularly for 62 percent of physicians. Online research also led to patients requesting specific prescriptions by brand name a whopping 40 percent of the time.

Patients aren’t the only ones researching online—Cello’s research found that half of the physicians surveyed globally (and 42 percent in the US) had visited Wikipedia at least once within the month prior to the study.

The data presented in the Cello report offers a glimpse of the attitudes surrounding the health care sector’s current relationship with technology and—perhaps more importantly—gives us a platform to talk about where it’s going in the future.

As the IoMT grows, so do the possibilities for reduced health care costs and improved patient care. Just think: What if all that data from those ever-popular wearables, like digital bracelets and watches, populated algorithms set to alert physicians when numbers indicated potential medical emergencies? Doctors are already recommending apps for patients—what if hospitals became smarter and patients overall became more empowered?

As we enter an age where these concepts begin to blur with actionable ideas, we must also consider the associated risks. For example, by definition, won’t the exact bring-your-own-device (BYOD) mentality Cello reinforced with their smartphone statistics hinder consistency? Of course, there are myriad security concerns that accompany any emerging technology, which grow exponentially when that technology involves uber-sensitive financial data and health care records. If you want to explore this topic further, check out this post I wrote as part of a series for Dell awhile back: How the Internet of Things Will Impact Health Care.

During a time filled with questions about the potential of health care IT and how to mitigate concerns—it’s refreshing to reverse the roles for a moment. Cello’s research gave us the physician’s perspective, a firsthand account of what technology is working well and what perhaps isn’t as convenient for those directly on the front lines of modern medicine. This data is important because any new technology, however sleek on paper, isn’t worth anything if it remains unused.

Can you draw any additional conclusions from Cello’s data? What does the future of IT in the health care industry look like from your perspective? If you’re a doctor, do you agree with the findings here? What about if you think about it from a patient’s prospective—do you have a different POV/experience? If you’re an IT pro serving the health care industry, does the proliferation of devices in the workplace scare you? What would you identify as the IoMT’s greatest potential? What about its biggest risk? There are so many things to talk about, and so many different points of view as we approach the topic of health care and IT and watch barriers continue to dissolve. I think it’s pretty fascinating, what about you?

Other Resources on This Topic :

This article was first published on FOW Media.