If you’re scratching your head about energy outlook, join the club. Anyone who says they have a firm handle on what to expect in the future of energy production and consumption does not have the facts on their side. The reality is there’s no shortage of conflicting evidence and opinions and there certainly isn’t just one set of facts that represent the Holy Grail of the Future of Energy. Just Google “energy outlook” and you will get predictions that are all over the board. One thing I know for certain is that we should all be skeptical of those expressing certainty when it comes to such a volatile sector of the global economy.

Despite what articles and “industry experts” want you to believe, no one knows what the future holds. There’s a lot at play in what will impact the future of energy. The older I get and the more I learn, the more I realize how little I know.

The energy outlook is hazy at best. That is the complicated truth. Having served on countless boards, the room is always filled with smart people. Inevitably, that leads one or a few in the room to think they have all the answers. I can tell you they do not.

In Oklahoma, where I live, there is intense attention on market fluctuations in the oil and gas market. There is a dichotomy between the slow-burn acknowledgment that “Yes, climate change is a thing that we must contend with” combined with “My Entire life, city, and its economy are tied to oil and gas production, I don’t know anything else” mindsets. I’ve lived in the thick of this dichotomy and have been watching with great interest. Can you have both?

One thing I’m certain about is that people have opinions on energy; how we get it, where we get it, how we move it, the impact on the environment and the local community, not to mention how we can grow our economy, maintain peace, and transition to renewables. It’s a lot to take in and consider.

So, it’s no surprise the energy outlook is hazy, but let’s look at what we DO know to get some clues about what the future might hold. Here are a few highlights of the facts on the ground as they present themselves in late 2019:

That’s what we know right now. None of us can read the tea leaves, and I’m suspicious of people who think they can. That being said, Mine Kuban Yücel of the Dallas Federal Reserve has some interesting things to say about energy outlook. She is wise enough to begin her thoughts, as she did recently at an August meeting of the National Association for Business Economists with comments like, “uncertainty abounds.” That is a sentiment I can get behind.

I appreciate Yucel’s data-based realism when it comes to energy outlook. So, with plaudits to the Dallas Federal Reserve, here are my best guesses as to what we can expect from a 2020 energy outlook:

Look for Lower Crude Oil Production Growth in The U.S. in 2020

As the following graph from Yucel’s NABE presentation shows, the outlook projects lower production growth. While production is up from 2016 and 2017 levels, the trajectory is slightly downward from early 2019. Oil rig count from a high in the 1200s to the mid 700s will inevitably slow production as capacity in the Permian and elsewhere bumps into the reality that there are simply fewer rigs to do the extraction. 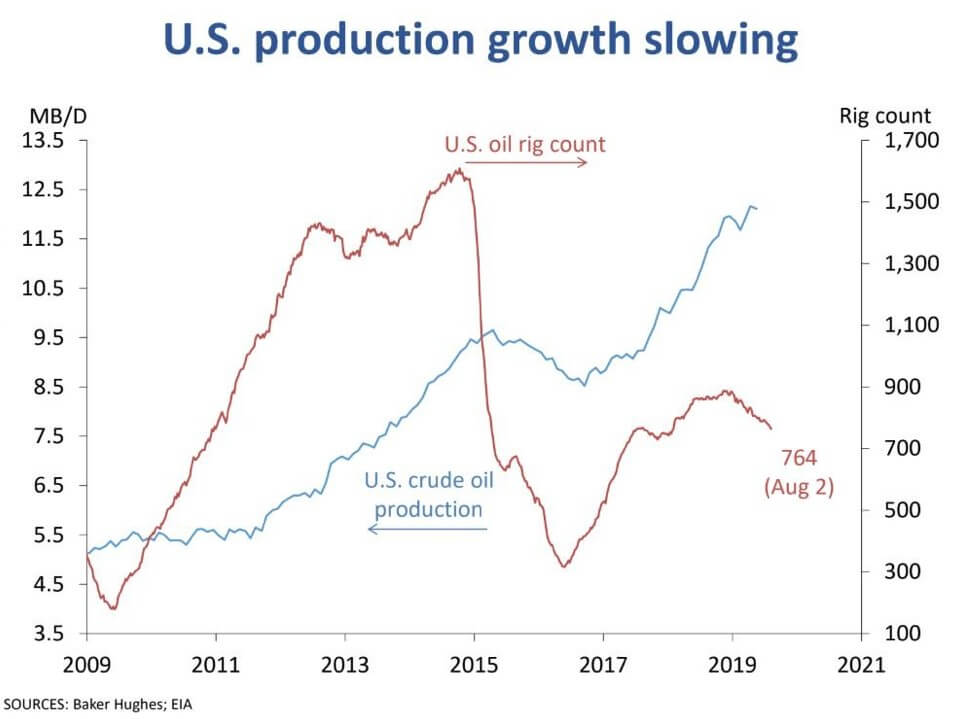 Despite the Downtick in U.S. Production, Expect to See an Oversupply in 2020

The below graph makes some assumptions about OPEC cuts, but if demand holds as expected, there will be an oversupply for the market to deal with throughout 2020. 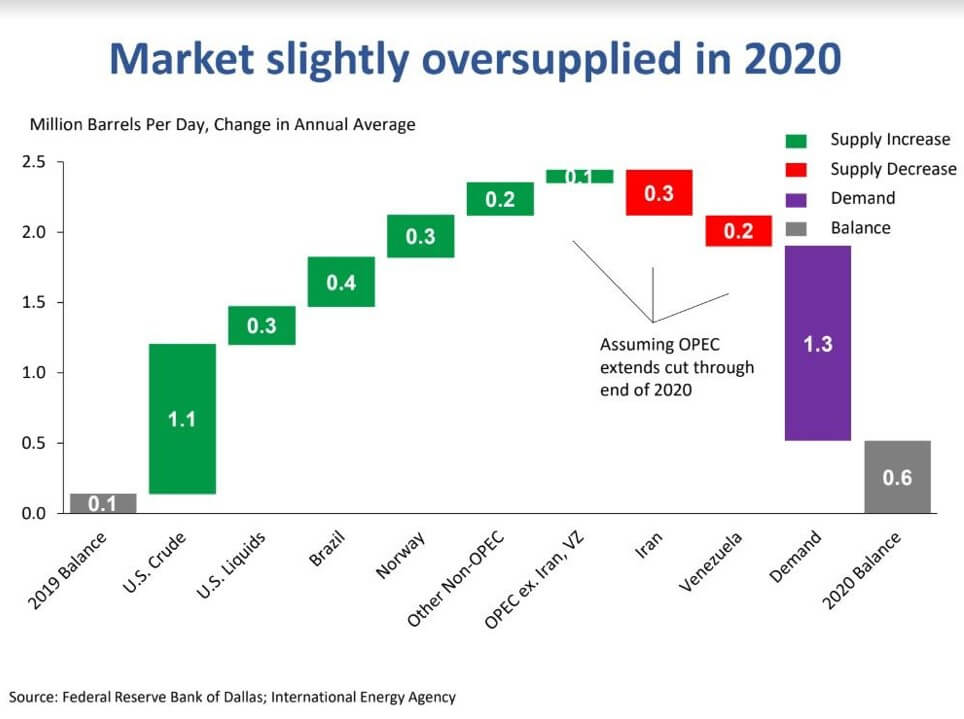 Expect to See Continued Uncertainty and Volatility in the Market

Things are not going to suddenly get uncomplicated, whether we’re talking about the Middle East, South America, or the United States. With some clues from the recent past and the current set of facts we have in hand, there are some expectations we can maintain.

I’d love to provide you with more surefire insight about energy outlook, but I have been around enough to see how surefire predictions go down in flames.

What Does This Mean for Energy Communicators?

Be sure to blend the use of facts and charts – like above – with stories of how these stories impact individuals, companies, neighborhoods, cities/towns, employees investors.

I live to influence others who seek to make the world a better place. As CEO of Saxum, an integrated marketing communication consulting agency I founded in 2003, I hope to be described by my peers and critics alike as bold. I’ve built my reputation by adding value to the lives of CEOs, entrepreneurs and the kid right out of college who is looking for some advice. I’m passionate about the lives of the team I work with at Saxum, a cadre of competitive professionals who can be described as brave, original, lively and driven.