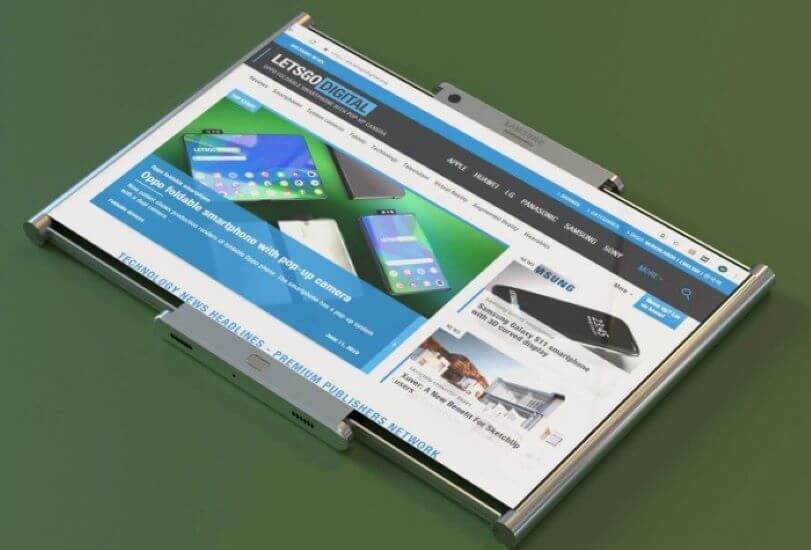 BGR reported on a new smartphone design patented by Samsung, showcasing a smartphone with a display that can be pulled from either side to stretch out into a device the size of a tablet. Read more at BGR.

Analyst Take:  Sometimes the fastest road to innovation is failure of a particularly large magnitude. Given the buzz that Samsung (and Huawei) created at Mobile World Congress this year around foldable devices, it seemed the next big wave of mobile devices were going to be those that you could fold, or perhaps more importantly unfold. For Samsung, the first iteration of this was a failure. Not because the tech wasn’t cool, but because it didn’t work well. (You can find countless articles following the beta for the Samsung Fold where its failures are well documented)

Today, leaks of a new Samsung smartphone design hit the web and while at first glance the design looks a bit odd and has some of the old “slider” device feel to it, I actually was a bit taken aback by the potential in such a design. These leaked images were based upon patents filed in early June by Samsung Display and the renderings in the article were prepared by Dutch Tech Site Lets Go Digital.

So while the patent is real, it’s hard to say if the renderings of a Samsung smartphone are of any substance. Any time a leaked (or rendered) design hits the streets, you have to take it with a bit of a grain of salt. While we have certainly seen plenty of real-tech leaked to the market early, we also have seen and heard some crazy prognostications for the next “thing” in tech. I still remember pundits suggesting the iPhone X would be a transparent device built for immersive mixed reality. In such, what we did get was an updated UX and “the notch.”

If Samsung can pull this off, and create a smartphone device that like the leaked image presents, it has the potential to be truly game changing as it can be thinner, more seamless and more usable than the current folding devices.

I was wrong about folding phones: They are going to change the mobile industry after all

Apple Samsung Deal Was a Crucial Deal for Apple

Samsung Developing Its Own Blockchain Network and Cryptocurrency